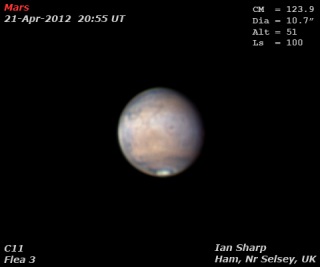 Here is another image of Mars taken on Saturday night. Mars is receeding rapidly and will soon be under 10″ (10 arc-seconds) in diameter. Consider that the moon is about 30 arc-minutes across which is 1800 arc-seconds, meaning that the current disc of Mars would fit across the Moon 180 times!

All the more amazing that we amateurs can capture things like Volcanoes on Mars. Admittedly a big one! Olympus Mons (which was known as Nix Olympica) is the tallest known volcano in the Solar System. It stands about 21km high – that’s 3 times higher than Everest! In this image it stands out dark as it juts out from the cloud (just right of centre). 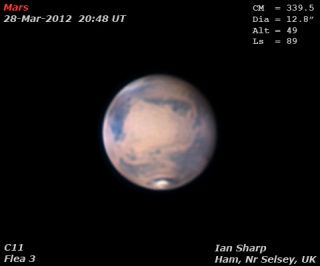 Last night’s Mars image, shown here, illustrates the effect of ‘seeing’ conditions. The seeing was fairly good and stable last night – compare this image to the post, here,  from the previous night when the seeing conditions were not so good. 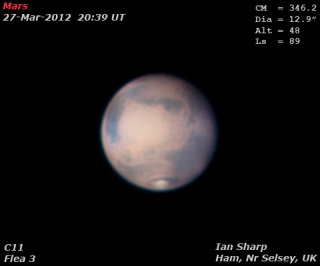 Another Mars image taken last night from here in Ham.

The biggest and most obvious dark region called Syrtis Major is visible on the left in this image. It’s interesting that the Martian ‘day’ is about 24 hours and 40 minutes (in other words the time Mars takes to rotate once on its axis). This means that, for Earth-bound observers, we only see about 40 minutes of ‘new’ territory each night if we observe at the same time. So, Syrtis Major will slowly crawl into full view over the next few days (for UK observers at least).

The seeing conditions were pretty jittery last night, so again this image is quite soft on detail. Not so many clouds visible either. 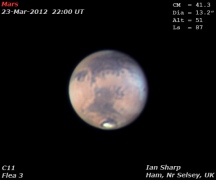 High pressure is dominating over the UK for a few days bringing glorious weather and last night at least, great seeing conditions. I had perhaps the best eyepiece view of the Red Planet I can remember, and it was rock steady on the laptop screen. If only it was bigger than 13.2 arc-seconds!

The Northern Polar region is at the bottom and the dark area center bottom is Mare Acidelium with Sinus Meridian the dark region disappearing on the left. The large dark region in the upper part of the image is Mare Erythraeum. I think that the black dot on the right limb is the top of the volcano Olympus Mons poking through the clouds. (correction it is Ascraeus Mons poking up – thanks to Martin Mobberley for this).  Click on the image to see it at full size. 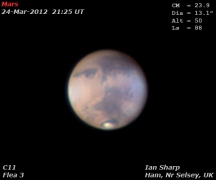 I’m adding his image for comparison – taken 24 hours later. The seeing was not as good, so a ‘softer’ result was obtained. 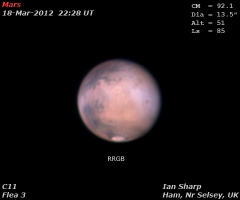 Having just got back from a refreshing week skiing in La Tania, France, I finally got of my backside to do some Mars Imaging. I have actually tried recently but could not get a good blue channel, and I have realised that my secondhand Trutek blue filter has no IR-cut! (in other words it is a Type I). This meant I was getting IR leakage in my blue images, thus ruining the final RGB. Anyway, now I’m back to my good old Astronomik Type II RGB filters,and here’s the result from last night. This is an RRGB image, meaning that I re-used the red for the luminance. Additionally, I used the amazing WinJupos program to de-rotate the images and was therefore able to shoot longer AVI sequences than normal.