M106 is an interesting galaxy! Situated near the handle of ‘the plough’, in the constellation of Canes Venatici, it is roughly 22 million light-years away, and is known as a Seyfert  galaxy which means it has a very active nucleus. In fact, at the centre of M106 is a super-massive black hole. Now, our Milky Way galaxy has one of those too, as do most galaxies  but not as big as the one in M106. It is the material falling into the black hole that causes x-rays and other unusual emission lines to pour forth from this galaxy.

Besides M106, there are many other galaxies visible in this image. The lovely edge-on spiral  near the bright star at upper left is NGC 4217 and is thought to be a companion of M106. I have annotated a few of the brighter ones on the image, but there are many more if you look closely at the bigger sized image which is available here:

As for the details of how this image was obtained. It was taken over some clear spells during 3 nights in late February and early March. A total of 27, 10-minute exposures were collected over this time through a white (luminance) filter, which is why this is a mono image. I will try and collect the R, G and B colours soon.  The telescope was my TS 130mm APO refractor at f/7 and the CCD camera used was my ATIK 383L. 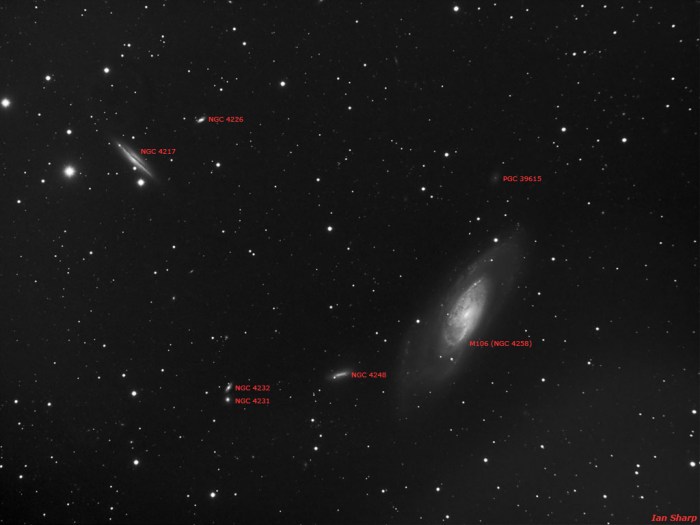