I’m very excited about the Comet PANSTARRS (full name Comet C/2011 L4 PANSTARRS). It is due to be at its best for us in the Northern hemisphere in mid-March 2013, and since it is March 1st today, I thought it was time to get ready for it.

Firstly the name: Pan-STARRS stands for “Panoramic Survey Telescope And Rapid Response System” which is a wide-field imaging facility developed at the University of Hawaii’s Institute for Astronomy. Details about the facility, which is not fully completed, are here http://pan-starrs.ifa.hawaii.edu/public/home.html. The comet was discovered on June 6th 2011 and because it is classified as a long-period comet, it takes the ‘C’ prefix (as opposed to ‘P’ used for short-period comets).

Comet PANSTARRS is the first naked-eye comet of 2013, and it is currently putting on a good show for our colleagues in the Southern hemisphere; Yesterday it was reported at magnitude 2.6 with a 2 degree tail, and it is still brightening.

So, the comet is currently heading towards its perihelion, which is the closest to the Sun it will get, and it will reach there on March 10th. The perihelion distance will be about 0.3 AU (1 AU, or Astronomical Unit, is the distance of the Earth from the Sun). Then, after it has rounded the Sun, and gets away from it a bit more, it will start to appear to observers in the Northern hemisphere. I’ve put together a couple of finder maps below.

The first shows where the comet will be at sunset on March 12th. The map is based on the latitude of the South of England, roughly 50 degs N, and sunset will be about 18:00 UT give or take a few minutes depending on where you are. You need to looking West just after sunset, and the Moon will be a very thin crescent, just over 1 day old. You may find you miss it completely before it gets too low, following the Sun. Mars will be below the Moon, possibly even harder to spot. The comet itself will be slightly up and left of the Moon. On this map, the head of the comet is about 12 degrees above the horizon, and will get lower as the minutes tick by. The tail should be stretching away from the direction of the Sun. You should have some binoculars at the ready and it should be a lovely sight in them, depending on how bright PANSTARRS has become! Interestingly, the planet Uranus is very close to the head of PANSTARRS on this day and, at magnitude +6, may be visible in a decent pair of ‘bins’.

Those with a DSLR camera should use a tripod and try taking exposures of several seconds. Set your camera to manual focus, and focus on the Moon, or Mars or any stars you may see in the darkening sky (your autofocus won’t work!). With the camera in fully manual mode, set the aperture as fast as it will go (the smallest number – f/4 for example), and the ISO setting to 800 or 1600. Try exposures of 30 seconds or so. Mess about with the exposure time – the camera should reveal more of the comet than you can see with your eyes. 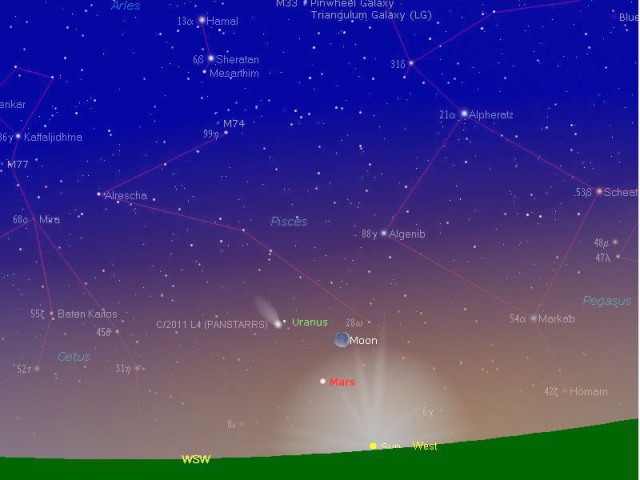 The following map shows the comet on the evening of the 15th March, also at sunset. You can see that, although it has moved a few degrees from the 12th, there are plenty of evenings to try and spot it. Now the Moon is much higher in the sky, and will be showing a phase of about 16%. 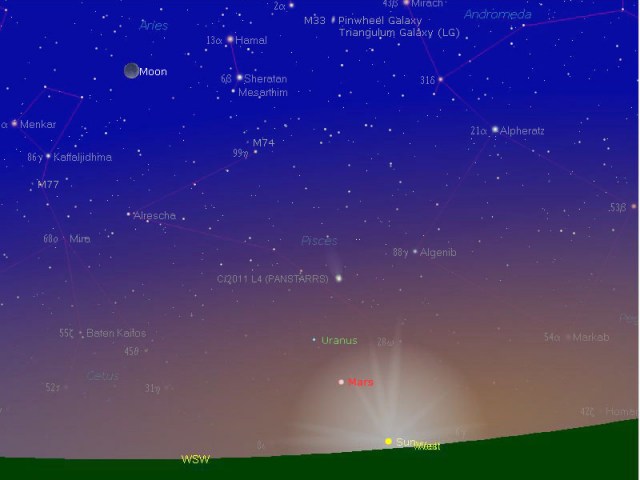 Good luck! Let’s hope it puts on a good show.

2 Responses to “How to see Comet PANSTARRS”