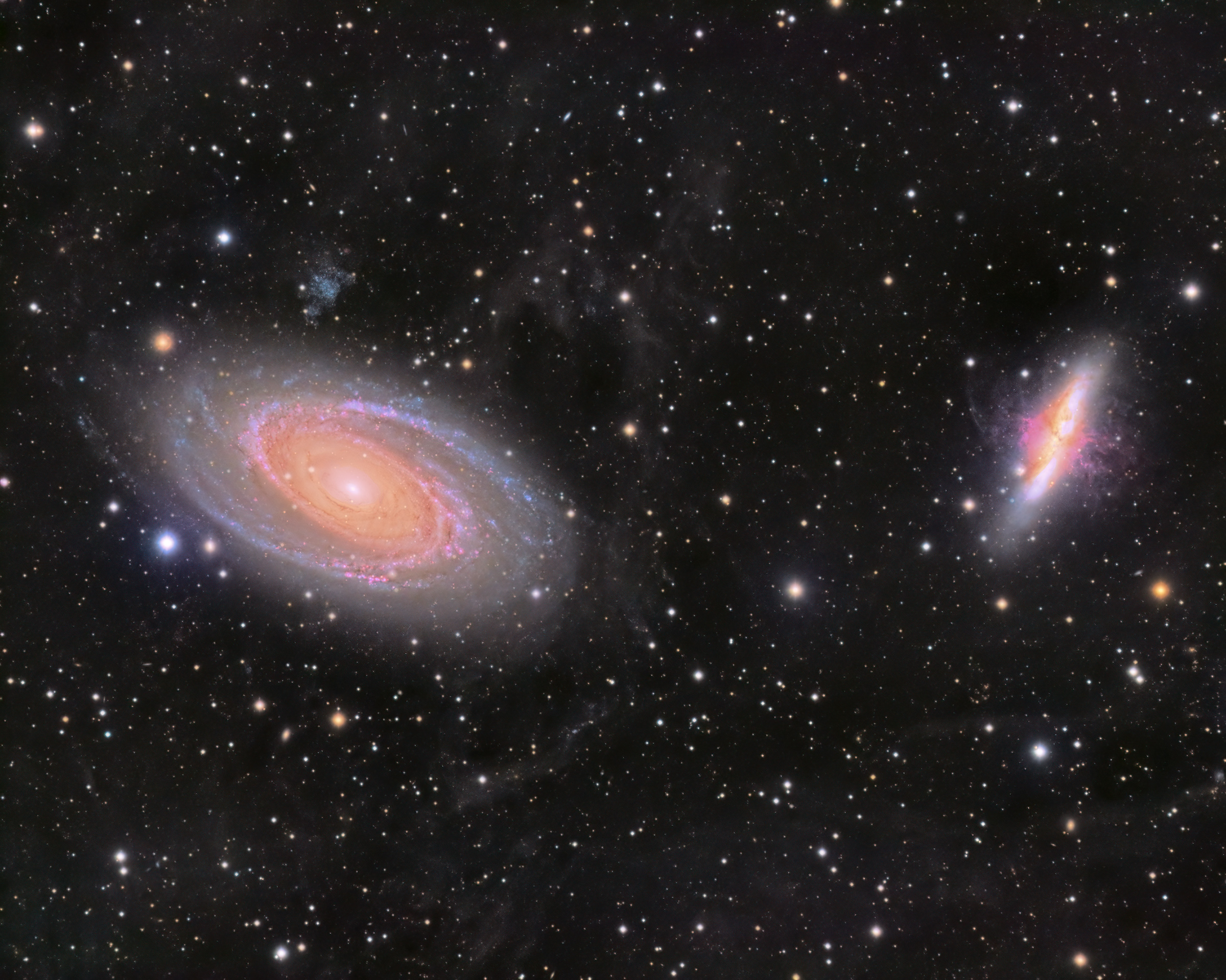 This is the first image I have posted using data from my new remote telescope setup in Spain and it is, perhaps, the ‘deepest’ image I have ever processed. I have only recently taken over this system after I purchased it from First Light Optics who also kindly bequeathed me all their images taken over the last year or so that the system has been in operation. The images used to make up this image were taken over April and May 2021 when M81 and M82, both in Ursa Major, were higher in the sky. The larger galaxy on the left is M81 – Bode’s Galaxy and the smaller one is M82 – The Cigar Galaxy.

M81 and M82 were both discovered in 1774 by the German astronomer Johann Bode who reported his observation to Charles Messier who then added them to his famous catalogue. Both galaxies are about 12 million light years away (which is 114 million million km or 770,000 times further away than the Sun).

Here is the colour image; click on it to see a bigger version. More details follow the image below:

What else can we see in this image? Directly above M81 is a blue patch – you can see it better in the full sized image. This is a satellite galaxy to M81 called Holmberg IX. This is a dwarf, irregular galaxy and based on the observed age distribution of stars it contains it is thought to have formed within the last 200 million years, making it the youngest nearby galaxy known. This would explain the blue colour as the stars within it will be young and hot.

The faint wisps all around the galaxies are all part of the Integrated Flux Nebula (IFN), so-called because it shines by the total (integrated) light of all the stars in our Milky Way Galaxy. The IFN lies beyond the main body of our galaxy, and is illuminated by the whole thing. It is incredibly faint and only recently discovered in 1984 by the IRAS satellite. To show it better, I have stretched the histogram of the luminance channel of the above image even more. This monochrome image is shown below:

For those interested in the technical details of the image acquisition and processing, the image contains a total of 78.5 hours of exposures made up as follows:

The above table shows the actual number of exposures that were used in the integration to make the final image. Many more were rejected because of satellite or plane trails, or thin cloud etc (for example 73 of 360 L images were rejected). All images were calibrated with bias, dark and flat frames and all processing was performed in the amazing PixInsight software.