Climate Change for Dummies #1: How do we know that recent increases in CO2 levels are man-made?

This is the first blog in a series I intend to write called Climate Change for Dummies.

So, How do we know that recent increases in atmospheric CO2 levels are man-made?

Over the last 150 years or so, the level of Carbon Dioxide (CO2) in the atmosphere has increased from about 280 parts per million by volume (ppmv) to over 400 ppmv – that’s an increase of roughly 43%!  Before explaining why we are absolutely certain that this increase is due to human activities, let’s quickly look at how scientists have measured this increase over time.

The chart below shows the levels of CO2 measured at the Mauna Loa Observatory in Hawaii. You can look this up and even download the measured figures here if you so wish. The red wiggles on the chart are caused by the respiration (breathing) of all the plant life on Earth, and the fact that there are more plants in the northern hemisphere. So, during the northern summer months these plants breathe in more CO2 than average and thus a seasonal cycle (or wiggle) is seen. (Isn’t science wonderful?). 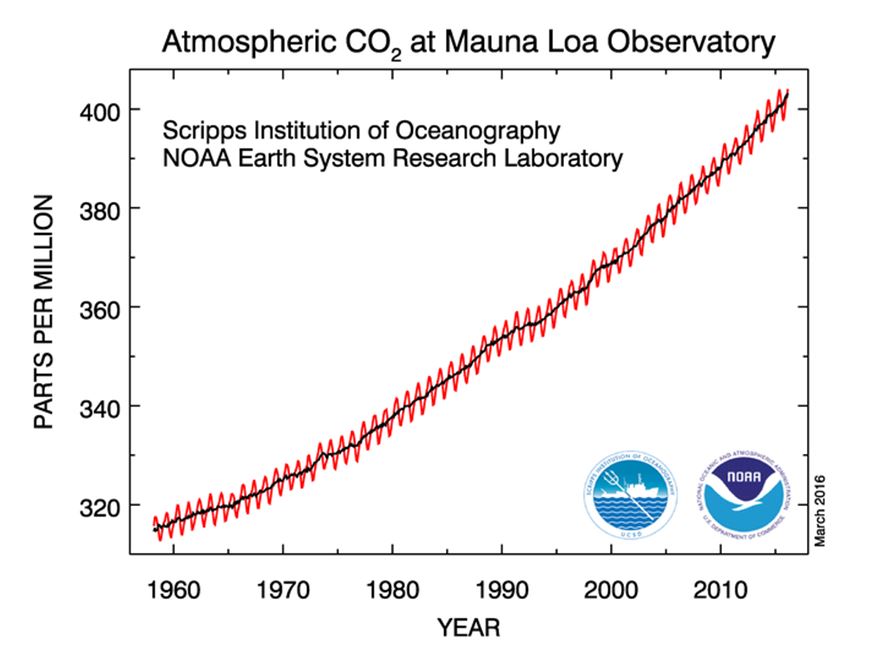 Looking at this chart, it’s pretty obvious that there is a big upward trend here. The chart below shows just the last 5 years, and I urge you to look at the most recent few points in detail. Why? Because not only is the average level climbing, but the rate at which it is climbing is also increasing. In fact, Carbon dioxide levels are increasing faster than they have in hundreds of thousands of years. 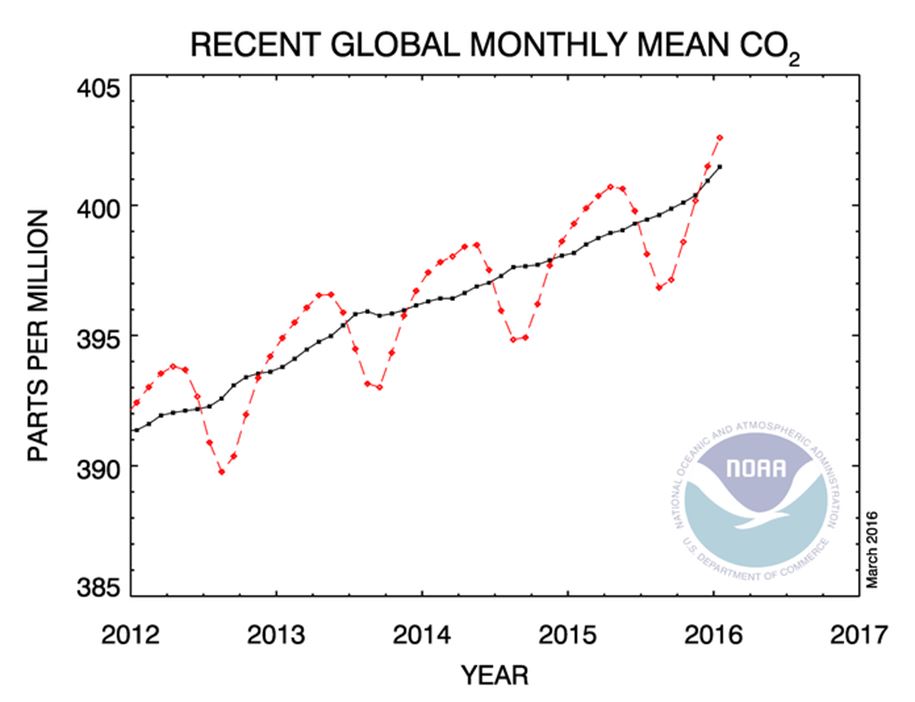 The chart below further illustrates that, in recent years, the rate of increase of CO2 has gone up, and is still going up. 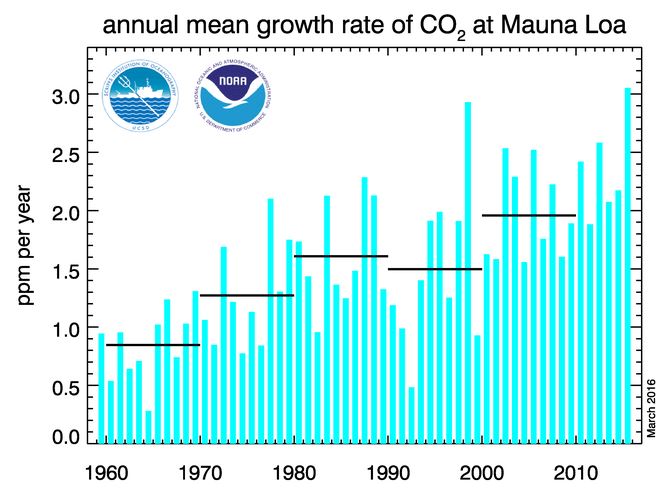 You may be thinking “Hang on a minute, how can anyone just state that the levels of anything are increasing faster than they did over the past several 100,000 years?” A very good question and one that any sceptical person should be asking. The answer lies in the fact that there are other ways of measuring CO2 levels other than having a CO2-level-o-meter on top of a mountain in Hawaii! The trick is to drill ice-cores from ancient ice sheets. I can’t improve on the explanation from the British Antarctic Survey here, and the introductory paragraph from their webpage is as follows:

Ice cores are cylinders of ice drilled out of an ice sheet or glacier. Most ice core records come from Antarctica and Greenland, and the longest ice cores extend to 3km in depth. The oldest continuous ice core records to date extend 123,000 years in Greenland and 800,000 years in Antarctica. Ice cores contain information about past temperature, and about many other aspects of the environment. Crucially, the ice encloses small bubbles of air that contain a sample of the atmosphere – from these it is possible to measure directly the past concentration of gases (including carbon dioxide and methane) in the atmosphere.

When this is done (no mean feat I would add) we see that CO2 levels today are not only higher than they have been for a very long time, but they are increasing at a rate faster than at any time in a very long time.

The chart below shows this over the last 400,000 years, but I should add that this has been going on for at least 800,000 years, and probably for more than 1,000,000 years. When you think that modern humans have been around for about 200,000 years, you start to put that timeframe into some kind of perspective. Also note that the ‘Current Level’ marker on the chart below (drawn up to 2010) is slightly out of date – today’s CO2 level is over 402 ppmv. 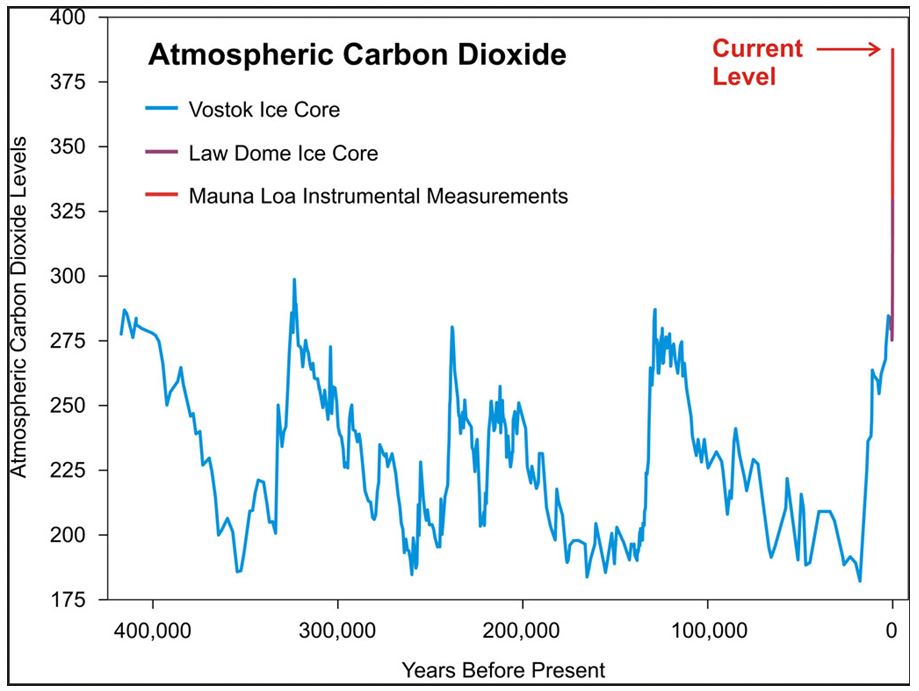 So, we’ve established that CO2 levels are higher and rising faster than in any time in the whole of the history of anatomically modern humans, and beyond!

Incidentally, if you’re curious about why there are regular cycles in the CO2 levels in the above chart then these indicate the coming and going of recent ice ages. We know that Earth’s climate has changed throughout history, and indeed it is by studying the natural changes in the climate that scientists know that the current rate of (human-caused) change is unprecedented. In the last 650,000 years there have been 7 cycles of glacial advance and retreat, with the abrupt end of the last ice age about 7,000 years ago marking the beginning of the modern climate era. Human civilisation has blossomed in this current interglacial period. It is not the right place to explain in detail why these cycles occur, but the brief explanation is that they are due to long-term changes in the orbit and tilt of the Earth.

Get to the point!

Now let’s move on and tackle the main point of this article – how is it that we are sure that this increase in CO2 is caused by humans?

Firstly, before we get to the ‘killer’ arguments, let’s just consider the fact that since the industrial revolution, we have been burning fossil fuels and clearing and burning forested land at an unprecedented rate. We know that these activities convert organic carbon into CO2, and we also know that the approximately 500 billion metric tons we have produced is enough to have raised the levels to about 500 ppmv. Why is it then that the current levels are lower and nearer 400 ppmv? The answer lies with the world’s oceans and biosphere which act as ‘carbon sinks’ and end up absorbing some of the CO2 from the atmosphere. However note that we still produce CO2 faster than these sinks can absorb it, and the net effect is the observed increase as shown in the discussion above.

To be quite honest, that should be enough to convince any reasonable person, but there’s more…

It’s all in the isotopes

Carbon comes in several flavours or ‘isotopes’. Most of the elements in the Periodic Table do. The thing that makes a particular element the way it is is the number of protons in its atomic nucleus. Casting your mind back to your ‘O’ level chemistry (at least if you’re British like me) you will know that the atomic nucleus of an element contains the protons and neutrons, with the wispy electrons whirling around the nucleus like planets revolving around a star. The fact that Quantum Physics says that this mental image is completely wrong is neither here nor there – it’ll do for our purposes here.  Also, remember that the whole subject of Chemistry (well, pretty well all of it) is explained by the number and arrangement of the negatively charged electrons which balance out the positively charged protons in the nucleus.  Therefore, an element can have a varying number of neutrons and still be chemically the same element.

And so it is with Carbon (C) which has three naturally occurring flavours, or isotopic forms namely 12C, 13C and 14C (normally pronounced as “C 12”, “C 13” etc). The numbers come from the total of the number of protons and neutrons, and Carbon has 6 protons and varying numbers of neutrons. 12C is the most common form with 13C making up about 1% and 14C only accounting for about 1 atom in a trillion. 12C and 13C are stable isotopes but 14C is unstable with a half-life of 5,700 years which is why it is extremely useful in dating objects using a technique called Radiocarbon Dating.

It just happens that, during photosynthesis, plants have a preference for the lighter 12C over 13C and so they end up being made up of Carbon with lower ratios of 13C relative to 12C, and since the fossil fuels that we burn are mainly derived from ancient trees and plants, when the CO2 produced from burning fossil fuels is released and mixed into the atmosphere, a lower ratio of 13C/12C is found there also. This means that the isotopic ratio of 13C/12C measured in a sample of today’s atmosphere will be lower than a sample from the past (when less CO2 from fossil fuel burning was mixed into the air).

Another piece of killer evidence comes from studies of the 13C/12C ratio in both tree rings and the bubbles of atmosphere captured in ice cores. Trees lay down the familiar rings that we can count to find out how old a tree is, and the analysis of the material in the rings can tell us what the isotopic ratio in the atmosphere was at the time the ring was formed.  It has been found, from tree rings and ice core gas, that at no time in the past 10,000 years is the C13C/12C ratio as low as it is today. Also, this ratio starts to decline at around 1850 AD – which is when CO2 starts to dramatically increase due to the burning of ‘old plants’.

Recent measurements are also showing that the lower 13C/12C ratio is showing up in the surface waters of the ocean and also in the shells and bodies of sponges and corals. This is analogous to the evidence found in tree rings, but it reflects the changes in the chemistry of the oceans rather than in the atmosphere (but remember, the oceans absorb the CO2 in the atmosphere). These measurements also show that the decline in the carbon isotopic ratio started when the activities of the industrial revolution started to pump more CO2 into the air. 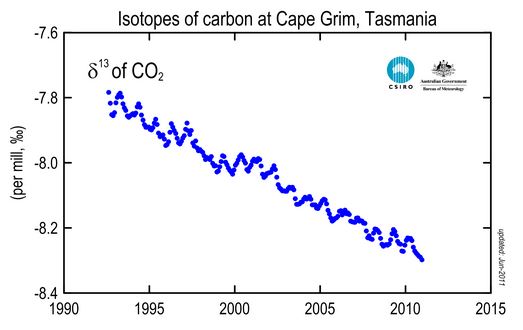 The next article in this series will focus on how we know that CO2 and other ‘greenhouse gases’ do actually cause the Earth to warm.