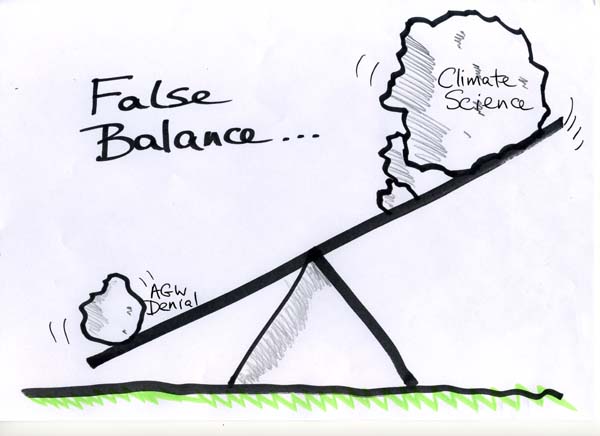 If you look up the term “False Balance” you will, no doubt, come across the Wikipedia definition. Here is the first sentence from the Wiki article:

To give an extreme example, if an article shows a picture of the Earth from space, we shouldn’t need to hear the views of a spokesman for the flat-earth society about how the picture can be explained, or if we hear about about a new fossil discovery from the Cambrian, we really don’t need to hear from a biblical creationist! Why? Because there is so much evidence for the fact that the Earth is (nearly) spherical, and so much evidence that the Earth is 4.5 billion years old (and not 6,000 years old) that there is no point. If we were to include the views of every spokesperson holding every crackpot belief, we wouldn’t get anywhere, and we would also be guilty of applying “False Bias” to our article.

The situation is the same with climate science. The overwhelming evidence is that man-made emissions of greenhouse gases (mainly CO2) since the beginning of the industrial revolution (and more specifically since the 1950s) have cause the Earth to warm up. However, there are parts of the press that seem to think that we should give equal weight to the views of climate change deniers as we do to the the scientifically-based views of proper climate scientists. By the way, I’ll use the term “deniers” or “contrarians” rather than “sceptics” because real scepticism is valuable in science and should not be hijacked so easily by those involved in peddling psuedoscience or straightforward denial in the face of a mountain of evidence.

Let’s just get things straight. There is so much evidence for man-made (anthropogenic) global warming (AGW) that it is an indisputable fact. Scientists are as certain of this as they are that smoking cigarettes causes lung cancer. We should, therefore, be concentrating on the solutions to this, perhaps the greatest challenge ever to face mankind, rather than give air-time to the politically and financially motivated deniers. Additionally over 97% of climate scientists agree with this, and a lot of the minority of contrarians take up their positions because of some sort of overriding political belief system or through their association with lobbying groups funded by the fossil fuel industry.

Does this sound like scientific dogmatism? After all, scientists have been wrong many times in the past, and isn’t it true that great leaps in science have been made by those great radical thinkers who have thought ‘outside the box’ and fought against the established views of their times? Well, yes, but the subject of climate science is all about the measurement and collection of huge amounts of data, and the statistical interpretation of this mass of data. There is no chance for a Newton, or Einstein to come along with a new and radical way of thinking about the subject; the physics is well understood and, contrary to what you might hear from the deniers, climate models are good, and have been so for many years. Climate Sciience is an ongoing process, one that relies on hundreds of dedicated men and women getting out there and applying themselves to the task. The truth is driven our by that great engine of science called the peer-review process. If you’re not sure what that is, see the Wikipedia definition, and here are the first sentences from that definition:

“Peer review is the evaluation of work by one or more people of similar competence to the producers of the work (peers). It constitutes a form of self-regulation by qualified members of a profession within the relevant field. Peer review methods are employed to maintain standards of quality, improve performance, and provide credibility.”

AGW deniers hate peer-review as their arguments (such as they are) simply fall apart when subjected to the process. Unfortunately they are very successful at spreading their messages no matter how ludicrous they may be. Deniers and contrarians will keep repeating their nonsense well after it has been debunked by real scientists, ethical bloggers and journalists.

Many newspapers and television news outlets will attempt to “balance” the overwhelming scientific viewpoint by also interviewing a climate contrarian to present “the other side.” The problem is that by disproportionately representing the small minority of climate contrarians, a false impression is created among the public that their numbers are greater than they are in reality. Even the BBC fall foul of this, and in fact they are particularly bad at doing so. The fact that they examined their internal practises, found them wanting but then ignored the findings is very disappointing.

Even the process of debugging the myths put about by the deniers can be dangerous unless handled carefully. The very act of making reference to the offending article or programme can draw more attention to it. This is known as the “familiarity backfire effect”.

There are seemingly endless examples where climate contrarians are spectacularly wrong about climate change but somehow the media still treat them as credible experts on the subject – this has got to change. If you want to read about many examples of this try Dana Nuccitelli’s excellent book Climatology Versus Pseudoscience: Exposing the Failed Predictions of Global Warming Skeptics.