Comet PANSTARRS with its anti-tail

Finally! A clear night to see and capture an image of Comet PANSTARRS. There has been a terrible spell of weather here in the UK recently, but last night I had a decent clear spell just after sunset.

This time I used my ATIK-383L CCD camera through my 130mm APO refractor which gives me a field of view of 69′ x 51′ – just right for this comet. The image below was the first one in a fairly dark sky because the comet has moved away from the Sun considerably since I last imaged it. So, although the comet has faded (I couldn’t see it with the naked eye), it is better placed for CCD imaging through telescopes.

This image is an averaged stack of 28 separate images. 18 of these were 60 second exposures, the remainder being 90 seconds (I increased the exposure as the sky darkened). This is why the stars appear as trails, because I registered each image on the bright nucleus of the comet before stacking them. It gives an idea of the relative movement of the comet against the background stars over the 30 minutes or so from beginning to end.

There is a notable ‘anti-tail’ visible in this image. It is the spike stretching out at about 8 o’clock from the head of the comet. This is caused because there can be a considerable amount of dust contained in the flat plane of the comet’s orbit, and this is concentrated near the head of the comet. If the geometry of the orbit, and the angle from which we view it are right, an anti-tail can sometimes be seen. Occasionally it can stretch away in the opposite direction to the regular dust tail being driven back by the Sun. 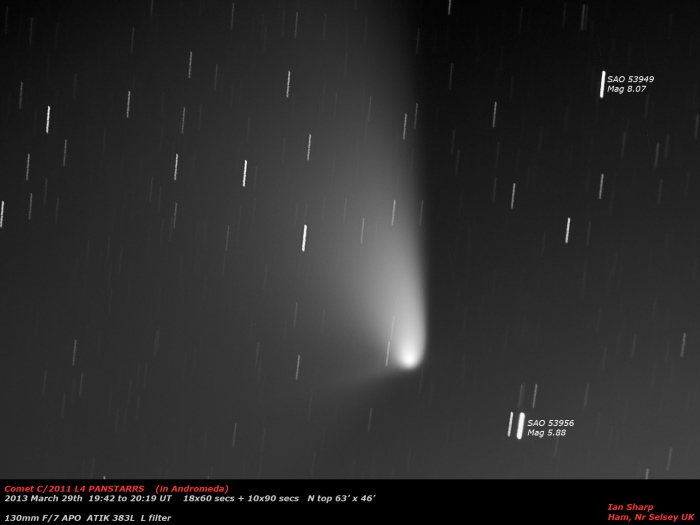