I have been using my trusty old C11 that I normally use for the Moon and planets to take some deep sky objects. The C11 gets used more this time of the year because it is ‘Galaxy Season’. This means that the Milky Way is not dominating the sky to us here at this time of the year as it is during the Summer months when it stretches across the sky, and that means that we can more easily see out of our galaxy to other distant galaxies without the plane of the Milky Way getting in the way.

This galaxy is often referred to a the Cigar Galaxy. It is Messier 82 and it is often shown together with M81, Bode’s Galaxy, but the field of view with the C11 and my ATIK 383L CCD will not fit them both in the FOV at the same time. This means we can zoom in on M82 which is only about 11 arc minutes across.

M82 is a bit of a strange galaxy to look at. It is a ‘starburst’ galaxy, seen edge-on and is also the closest starburst galaxy to the Milky Way. As a starburst galaxy M82 has a rate of star formation 10 times greater than our galaxy. Conditions for the starburst activity were believed triggered by a past close encounter with M81 between 300 and 600 million years ago which must caused gas and dust to be compressed into conditions favourable for star formation. 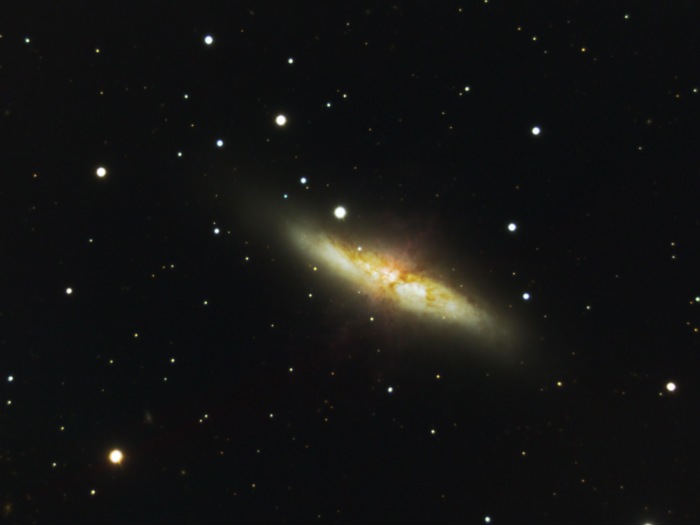