As the weather here in the UK is still terrible, I’m still messing about with older data. Here is a re-processed image of IC 1805 – The Heart Nebula which lies in the constellation of Cassiopeia. This image, taken through a 7nm Hydrogen-Alpha narrowband filter, is composed of about 8 hours of exposures, each of 20 minutes. To help appreciate the apparent scale of this image, the full moon would fit about 4 times across it, but the field is not wide enough to include the nearby Soul Nebula – hence the title for this blog entry.

This large emission nebula is a region about 200 light-years across and lies in the Perseus arm of our Milky Way galaxy. Our Solar Syatem is located on the Orion-Cygnus arm which is just ‘inside’ and next to the Perseus arm. The IC 1805 region is about 7,500 light years away (compared to the overall diameter of the Milky Way which is roughly 100,000 light-years across). 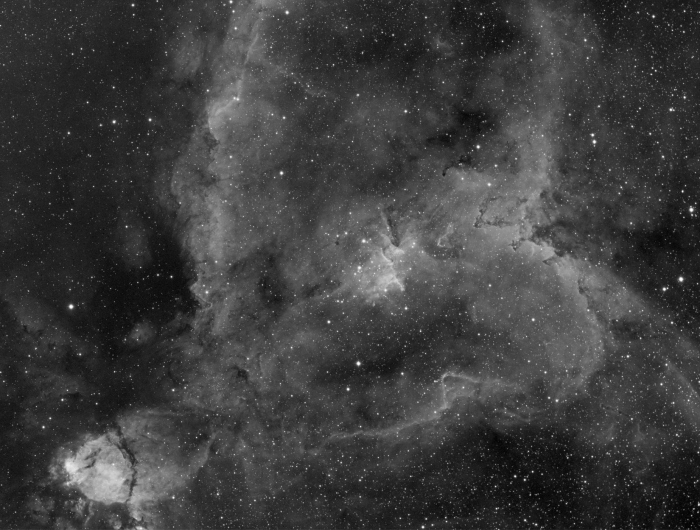 This emissions from this lovely nebula are powered by a cluster of hot, young stars, collectively known as Melotte 15. ‘Young’ at only 1.5 million years old, really means just that, when you consider our Sun is over 5 billion years old. However, some of these youngsters weigh in at about 50 times the mass of our Sun, and will burn bright and fast. Here is the center of the Heart in more detail. 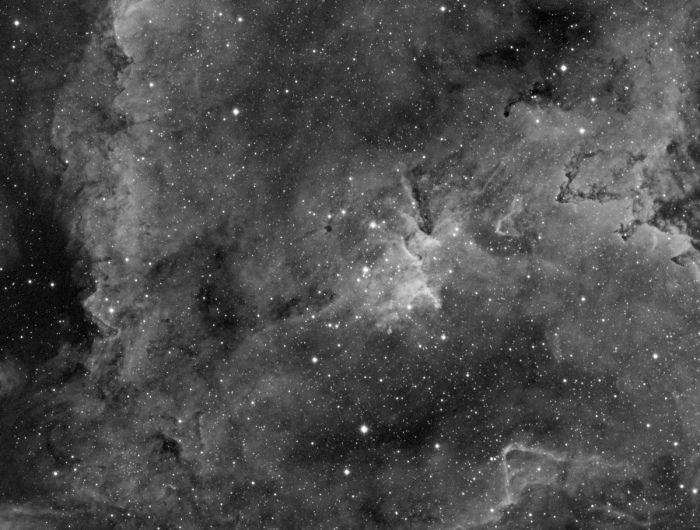 Happy Winter Solstice to everyone!

Here’s a Winter Rose. It’s the Rosette Nebula (Caldwell 49) taken in H-alpha. Also, click the thumbnail below to see the center region in more detail. 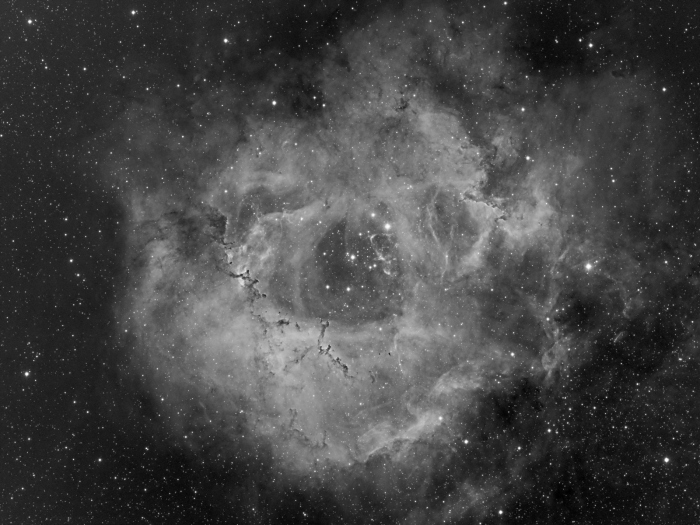 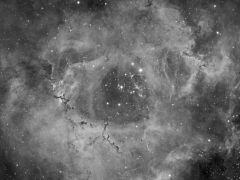 It’s been clear and frosty for a few nights here on the South Coast of England, and when it’s dark by 16:30 it’s a long night! So, it’s possible to do a lot in one night.

I am still fascinated with those classic, well known deep-sky targets, so I decided to use the early part of the evening to image M33, the lovely galaxy in Triangulum. I haven’t used this combination of equipment on it before and my Pentax 75 with the ATIK-383L CCD gives a great field of view for this object, and as there was no moon to get in the way I used a clear Luminance filter on this occasion, with the intention of grabbing colour data another night. Here is the result of combining 14, 15 minute exposures: 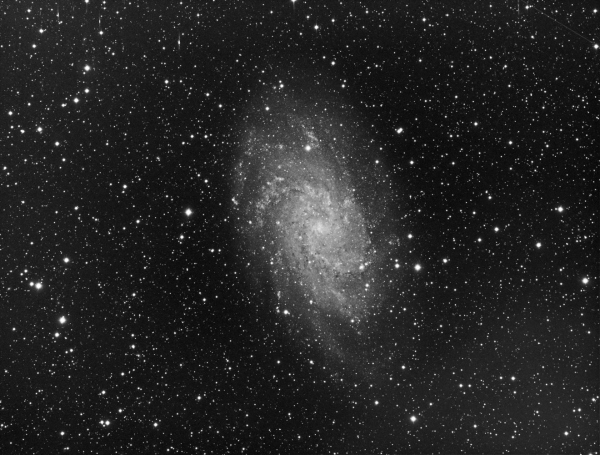 So, by about 22:30, Jupiter beckoned! It had risen nice and high, so I switched telescopes and cameras to image it. I have my Celestron C11 OTA riding alongside the little Pentax refractor, so no need to move any kit in the dark. It turned out that the seeing conditions at very high resolution were not a good as I had hoped (the seeing does not affect wide-field astrophotography as much). So Jupiter came out a bit ‘soft’ as you can see below. This image is a combination of 9, 1 minute video captures with my mono Flea3 CCD. Frames were captured at about 60 frames per second and I took 3 runs in each colour (RGB). WinJUPOS was used to compensate for the rotation of the planet over the 9 minute capture period. 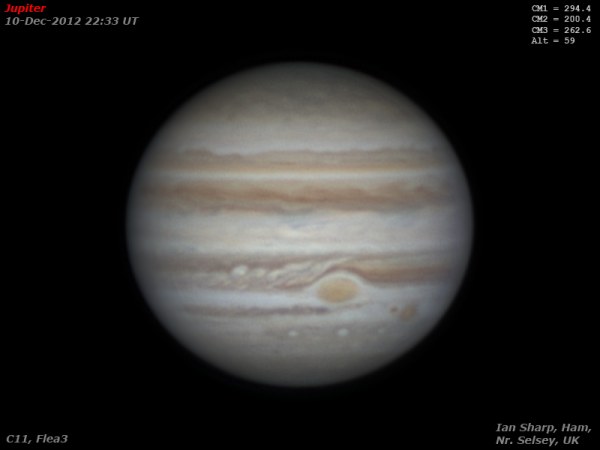 Onwards to my next target – The wonderful Horse Head Nebula in Orion. This was sitting nicely in the sky about an hour before culmination, so I switched back to the deep sky kit again and managed to grab 2 hours of data before deciding to quit for the night. How I’d love to try this target from a more Southerly latitude as it doesn’t get above about 36 degrees from here. 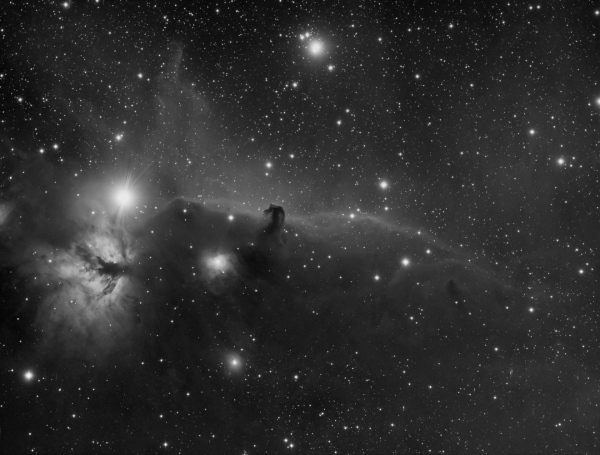 So, all in all a good night. Plenty more to do to turn these two deep sky shots into the finished colour images I want. I’ll probably shot some H-alpha on these as well to sharpen the up!

In my last post, I presented a re-processed version of an image of M45 – The Pleiades that I took last year with a one-shot colour CCD. This made me think I should have a go using my more sensitive mono CCD and separate filters. So here is the result!

The image consists of 4 hours of luminance data (a white-light filter) and 1.5 hours each through red, green and blue filters (all exposures were 10 minutes). Taken over the two nights of 8/9 December 2012.

I shot the colour data on the sad day that the great British Astronomer Sir Patrick Moore passed away. I was lucky enough to have known him for the last 42 years (since I was a lad of 10). I know he would have liked this image – he was a fan of the work of amateurs and was fascinated on how we can produce better images now than even the largest telescopes in the world could produce not too many years ago. 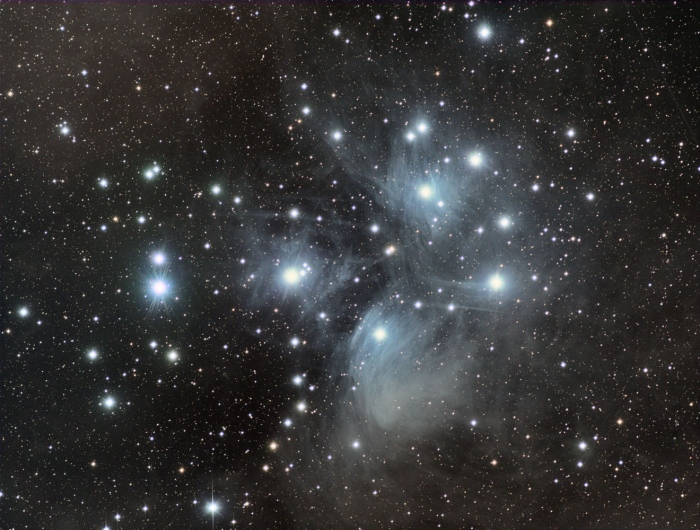 From time to time it becomes apparent that your image processing skills have improved to the point where you become convinced that it would be possible to reprocess old data and stun the world with the results!

I often find, however, that the improvements are minimal, and that is probably the case here, but I still find this target fascinating. Here is a re-processed image of M45 – The Pleiades, which is currently well placed in Northern Hemisphere skies. Jupiter is not too far away too.

I captured this data in September 2011 using a QHY-8 one-shot colour CCD camera (which I have since sold!). The telescope was my little 75mm Pentax APO refractor. I took 20 exposures each of 10 minutes and combined them to produce this. 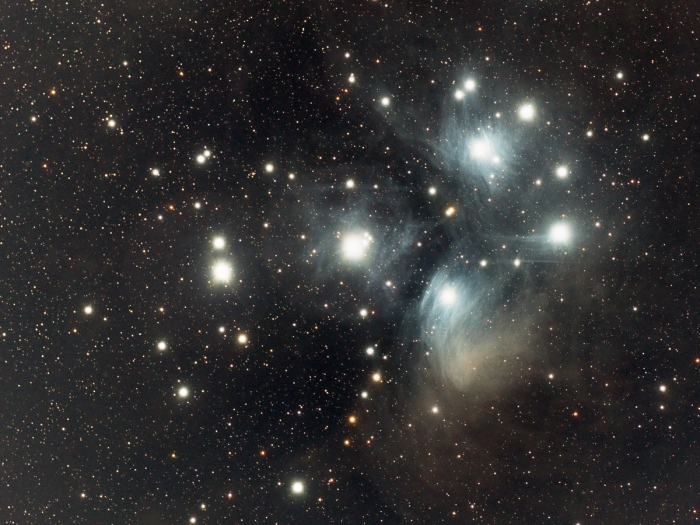 What to do before taking images of Jupiter at about 10pm? It gets dark here at about 5pm so there’s plenty of time! I currently have my little Pentax 75mm APO mounted side-by-side with my C11 so that I can switch easily from Deep-Sky imaging to Jupiter and back again.

So, last night I decided to use a H-alpha filter on a target I’ve never tried before – The Gamma Cas Nebula (IC 59/63). Gamma Cas is the middle star of the ‘W’ shape of the constellation of  Cassiopeia. The star itself is an ‘eruptive’ variable and its brightess varies from about +1.6 to around +3.0. The nebula nearby the star is quite faint and I used 30 minute exposures; 8 in all making 4 hours of total exposure. The scale of this image (using an ATIK 383L CCD camera) is about 124′ x 92′ (for scale, the Moon is about 30′ (arc-minutes) across. I guess I need to grab some RGB colour soon! Click the image to see the full size version (actually it’s 50% of the original). 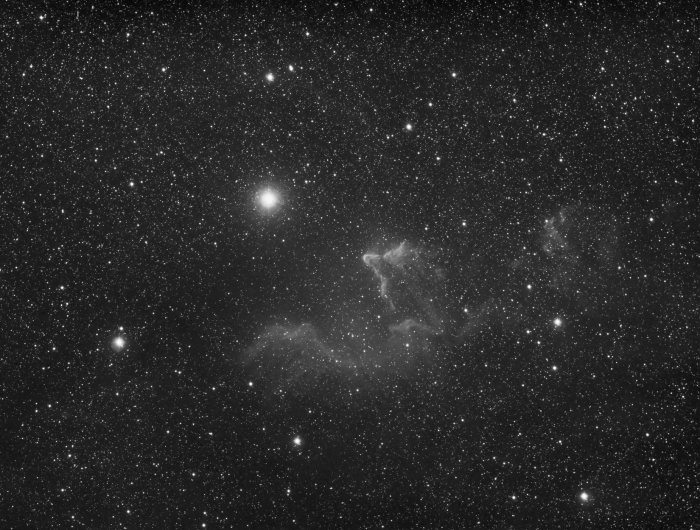 Another clear, frosty night here on the South Coast of England. The seeing conditions were quite stable again and I took these 3 images of the Great Red Spot and also ‘Red Spot Jr’ crossing the disc.

This one is the middle of the 3 images, all three are available via the thumbnails below. 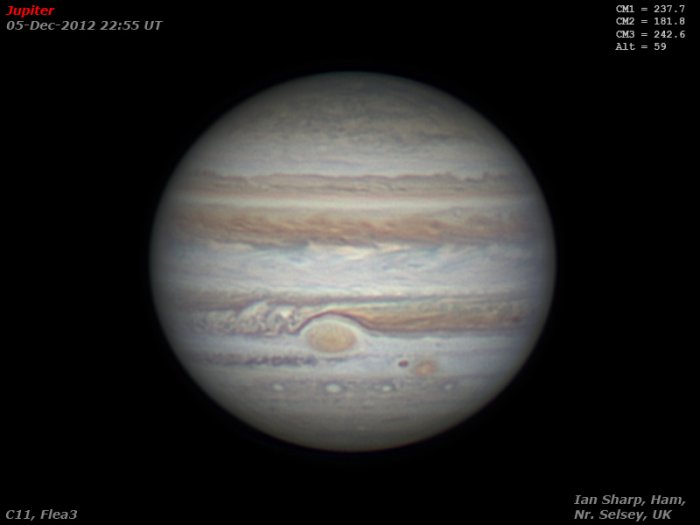 Jupiter reached Opposition at about 1am UT on the morning of 3rd December 2012. Here are two images of different aspects of the planet. The one with the GRS was taken on the night of the 3rd and the second image taken on the 4th, with slightly better seeing conditions.

Opposition means that the Sun, the Earth and Jupiter are in a line. The Sun is therefore shining directly on to the face of Jupiter as we look at it. It also means it is closest to us and hence the disc is the largest it gets in this apparition. 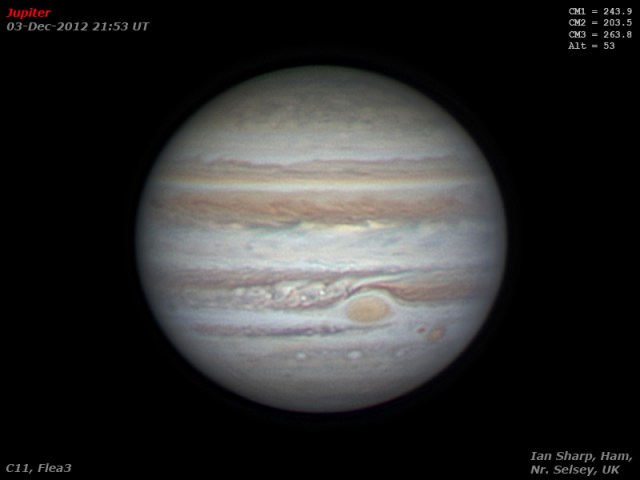 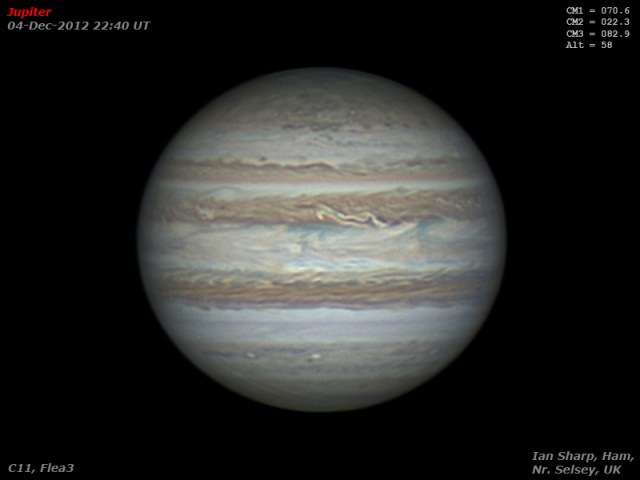