Yesterday, I posted the monochrome H-Alpha image of M42, taken in full moon-light. To get the RGB colour data, I will have to wait for the Moon to go away, or will I?

In the image below, I took the RGB (Red, Green and Blue) data from a colour image of M42 I took last year with a one-shot colour CCD camera. The colour image was taken at a much smaller scale with a much smaller refracting telescope, and I had to scale it up in size to align, rotate and fit the new H-Alpha image which I used as the luminosity channel in this image. The colours look a bit washed out here, which happens if you just simply use Ha as luminance, but I think it does look pretty! 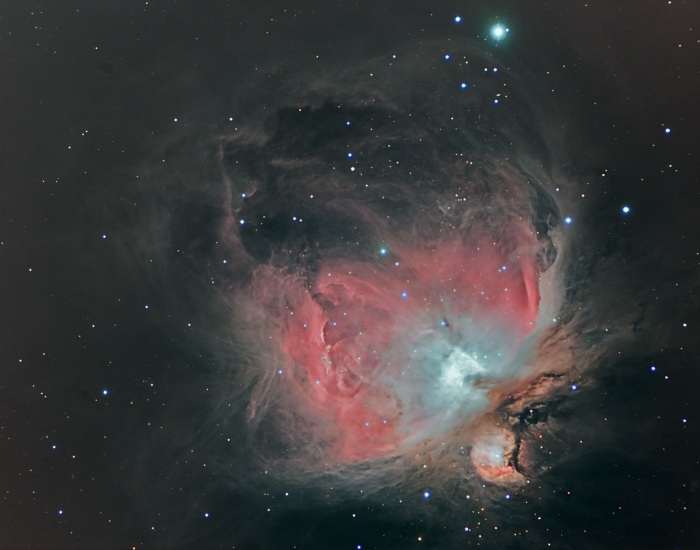 It just shows that the colour data does not have to have the full resolution (detail) of the luminance data. This is why astronomers often shoot the RGB data for their images with their cameras in ‘binned’ mode. If you bin by 2×2, it means that you have 4 pixels adding up to make one. The camera becomes twice as sensitive and you can expose for less time to get the same ‘depth’ of image. The downside is that the image has half the number of pixels across and down, so you pay by losing resolution. But we’ve just discovered that doesn’t matter too much!